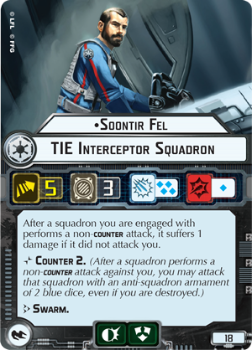 After a squadron you are engaged with performs a non-COUNTER attack, it suffers 1 damage if it did not attack you.

Soontir Fel was considered among the best starfighter pilots in the galaxy, becoming an Imperial hero, but his journey to those heights was anything but easy. Born on Corellia to a farming family, Fel developed his piloting skills over the fields before gaining entrance to the Imperial Academy and beginning a career as a TIE fighter pilot. He served dutifully, demonstrating a strong sense of responsibility for his men. After a series of events out of his control tarnished his career, Fel was exiled to the lackluster 181st Imperial Fighter Wing, which he revived, eventually gaining its command and the title of Baron of the Empire, winning Fel a reputation as the Empire's most deadly pilot and the 181st as its most elite starfighter unit. During that time, Fel met and married the famous actress Wynssa Starflare, who he discovered was actually the sister of Rebel ace Wedge Antilles.