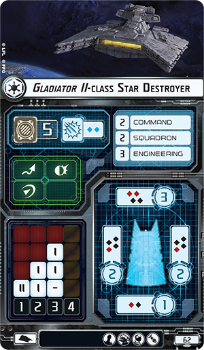 The Gladiator-class was a small Star Destroyer that shared its keel design with the Broadside-class cruiser. A ventral protrusion on the hull appeared to cover the ship's main reactor, but was also the location of several cannons. The class had two main thrusters and no visible secondary thrusters.

The Gladiator-class was originally envisioned as a Republic escort vessel for the Victory-class Star Destroyer, and the initial design was made by Walex Blissex for Rendili StarDrive. The final design was not finished until after the end of the Clone Wars, and with the Victory-class being abandoned as a main warship by the Galactic Empire, the specs were handed over to Kuat Drive Yards.